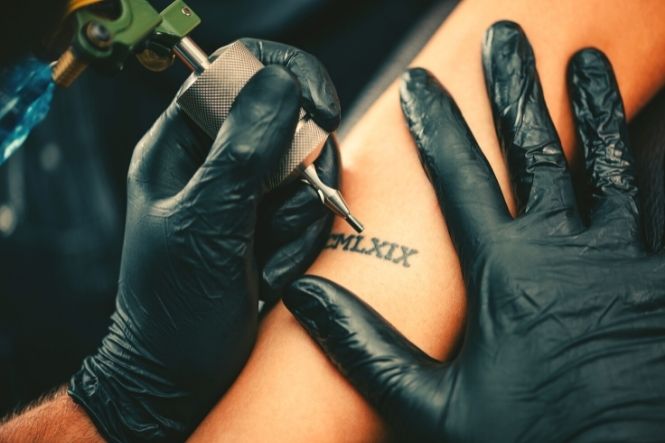 Cremation, disposing of a deceased body by burning it, now accounts for over half of all funerals in the United States. Accompanying cremation’s rise in popularity, some tattoo artists now offer “ritual” or “commemorative” tattoos that incorporate cremated remains into tattoos. For grieving friends and family, this offers closure or acceptance, knowing that their loved one will be carried with them in the tattoo.

But are there any significant risks – physical or legal – to consider before getting a tattoo that incorporates cremated remains? As we’ll discuss below, the use of cremated remains in tattoo ink poses no known health risks beyond the usual risks involved with getting a tattoo. So far, the practice is unregulated in the United States. But not every tattoo artist is willing to do a ritual tattoo.

How is a body cremated?

After non-combustible items like pacemakers are removed, bodies are exposed to high temperatures, as high as 1800 degrees Fahrenheit, until their mass is reduced to pulverized bone matter. Organs, tissue, and fat are completely incinerated, but bones and teeth do remain.

Any further fragments of perceptible size, such as metal fillings, are carefully sifted out. Then the material is ground by a milling machine until the results are like powdery sand, called “cremation remains” but often colloquially referred to as “ashes.”

No virus or bacteria carried by the deceased can survive the high temperature of cremation, and if the deceased carried an infectious disease, no trace of pathogens will survive in the remains. The remains are sterile and non-toxic at that point, posing no health hazard.

How is cremation tattoo ink prepared?

Even though the remains were sterile as they came out of the crematorium, some tattoo artists consider it best practice to bake remains again to ensure sterilization in case contamination was introduced after cremation, by exposing them to air or storing them in a non-hermetically sealed container for an extended period. Only then would the remains be considered ready to be blended with tattoo inks.

Although cremated remains don’t post bacterial risk, tools used to transfer cremains into the ink need to be sterilized in an autoclave, as with other tools used for tattooing. The facility in which the ink is mixed needs to be similarly sanitary as well. Obviously, you want tattoo artists to use proper sterilization techniques anyway, but this is one extra component for them to think about.

Cremated remains don’t dissolve in tattoo ink, so only a small amount is mixed in, usually less than a tablespoon depending on the volume of ink. Use too much and the ink will thicken, which can gum up the tattoo machine. Additional milling with a mortar and pestle might be necessary to get the remains to the right fine consistency for tattooing.

If you can’t find a tattoo artist that is comfortable or experienced with this process, several companies offer to prepare cremation ink as a service. You provide cremation remains via a collection kit to the company, and they return bottled ink that was theoretically prepared according to exacting sanitary standards and is ready for a tattoo artist to use.

How is the tattooing process different from getting a normal tattoo?

The process is the same. A tattoo artist uses a machine to inject prepared ink in a desired pattern below the surface of the skin. White blood cells rush to the tattoo site to begin the process of healing the damage caused by the machine puncturing the skin many times. Pigment particles are too big for white blood cells to eliminate, so the ink remains permanently visible.

The primary difference that some people have reported is that ritual tattoos can be itchier than normal tattoos as they’re healing, but not to a degree that has generated specific warnings against this procedure. There may be a correlation between too much remains blended into the ink and increased itchiness.

Yes, to date no laws or regulations prohibit ritual tattoos. Ritual tattoos are still a relatively rare occurrence and have so far posed no health risk that would require health agencies to step in with regulations. In Canada, a health agency has issued a warning that the procedure hasn’t been sufficiently studied but hasn’t identified a specific health risk to worry about.

Ritual tattoos are thus covered under existing safety regulations for providing tattoos. Of course, cremation itself is regulated, typically requiring a death certificate and the approval of a medical examiner; the exact requirements vary by locale.

Why would a tattoo artist decline to give me a ritual tattoo?

Tattoo artists are familiar with the concept of memorial tattoos, designed to commemorate the loss of a loved one. Incorporating cremated remains into the ink adds a unique layer of complexity. No obvious health risks have been identified, and many happy customers have provided anecdotal support of the procedure’s safety, but to date, no proper scientific study of the procedure has occurred.

Getting a tattoo is not a zero-risk activity to start. Your skin may be too sensitive, or you may discover you’re allergic to the ink. Yes, the cremated remains are foreign particulates that your body theoretically might reject, but the ink pigment is also foreign to your body. A tattoo artist may not want to introduce an extra component to the procedure that might cause unpredictable harm.

The extra work required to prepare the ink with cremated remains may not be cost-effective for the artist in terms of time spent versus what a client might be willing to pay. And in one reported case, an artist inadvertently spilled the remains, causing understandable stress for the client. An artist may well prefer to avoid that kind of high stakes situation.

Attitudes about death vary widely across society. While some people are comforted by the thought of carrying a symbolic piece of their loved one with them at all times in their tattoo, others may find the procedure distasteful or even disrespectful and may decline on moral grounds.